It’s an idea to keep up appearances and believe that you’re motivated.  Taper week is hard leading up the race when you want something to do as well as eating all the carbs up in sight so another blog post seemed a reasonable outlet even if I haven’t been running or training.  Counting down the days…

I’ve just finished reading an inspirational running memoir by Dean Karnazes also known as Karno called Ultra Marathon Man.  It details how Karno trains ruthlessly to the whip of his endurance fulfillment.  The Western States 100, a South Pole Marathon and completing The Relay to Santa Cruz as a solo Team Dean a run of 200 miles.  He does this with the help of his supportive family in the crew vehicle known as the Mother Ship, he finds this support valuable for many reasons that you’d have to buy the book to discover.  Tag lined “Confessions of an all night runner” this athlete has some amazing lessons to teach.  He calls runners life’s “super users” something I’ve long thought about.

We runners don’t just spend our surplus time camping out on the sofa in front of the telly.  We get out there and experience new trails, new heights, new lows, travel to distant lands and meet new connections along the way.  Running to me isn’t just a sport.  It’s a way of thinking and it’s a way of life.   Unlike other memoirs Karno is less concerned with the science of running, mostly because if he knows of any he shows that he ignores and defies it, and is more concerned with the narrative of how he gets there with the main motivation being trying to answer the question , “so Dude, do you mind me asking why’re you doing this?”  posed by a character known as the Pizza Delivery Dude at the begging of the book.

It’s a good question for any of us runners to be able to answer.  The answer is a living being subjective and fluid to life’s changes and progression so the answer you once had could be a different answer the next time you’re questioned so it’s good to keep track.  I first ran in February 2013 when my motivation was simple.  I wanted to run so that I could chase happiness like Kilian Jornet and one day run the Olympus Marathon.  It gave me cause to start what KJ calls the search for happiness.   Running changed my life and 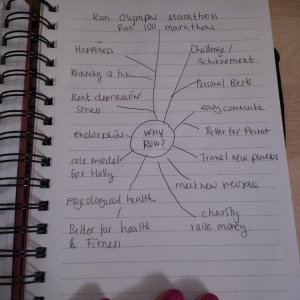 sense of well being identifiable.  Mount Olympus and happiness are still my key motivators but you can see through the cluster that those motivations have since grown from that original acorn into something more.

These motivations come in handy at times like mile 24 of a marathon when energy starts flagging and thoughts turn dark.  You start questioning your sanity.  Having that cluster to hand in a corner of your mind you can provide yourself with perfectly acceptable reasons for an argument against being crazy. You know, whilst you’re running up that hill, at snail pace in the rain and wanting nothing more than a hot chocolate and bed … but it’s okay because you’ve got your reasons.  Just make sure they’re strong enough to keep you going and you’re golden.

In other news it’s the lead up to the Bristol 10k on Sunday.  One of the highlights of the year for me.   But it is also a time when both my Uni courses are ending for summer.  I’ve been glad of the time I’ve forcibly had to take to taper because I’m so busy revising Art Culture from 1100 on wards that I’ve only fit in two small training runs which is frustrating as it meant I’ve not been able to join the Ovo Running Team on it’s final few runs but it is blossoming now with a dozen members all taking part on the big day.  Time to carb up and rest up! 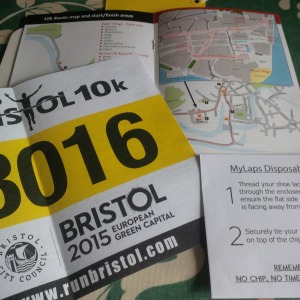