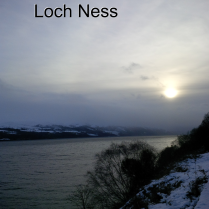 Yesterday afternoon meant a drive to Loch Ness just past the city of Inverness.  It was a long drive through a fresh batch of fallen snows.  Two inches of it coupled with black ice made it slow going.

The Loch Ness Exhibition informed us that this freshwater lake, the largest in the land, was 23 miles long.  It took us through a handful of interesting rooms designed to tell us individual segments of the exploration into the sightings of the famous Loch Ness monster.  Unfortunately the idea that only 20% of the Loch’s natural food chain would be left over for our Nessie disproves the idea that a large monster could sustain itself there.

Being a runner I had researched the Loch Ness Marathon route so that I could run sections of it.  However, having left late, then driven to and around the Loch with a visit to the Exhibition Centre I only had half an hour of diminishing silvery daylight turning dusk blue on this cold mid-January afternoon.

So I had Steve drop me off 5k away from Fort Augustus, where the marathon route starts, and he drove off to get food and wait for me at the village.  I turned on some Prodigy and ran 5k of pure descent to the village on the South Side Loch Ness.  I had nothing but the descent, my thoughts and the beats.  I clocked 28:28 minutes for the run by the time I met Steve at the Visitors Centre.  At this point the last of the weak sunlight had set and the lights had turned on in the village setting odd balls of yellow light against the dusk blue snow on the surrounding mountains.

I let my thoughts wonder as freely as possible. My mind began to think about what I wanted to do with this blog. Initially I began a document called The Journey To Mount

Olympus to note down my progress as a runner whilst I was on the journey to the main goal – Mount Olympus Marathon.  The Journey To Mount Olympus seemed too long.  Also not very profound as people do it each year so why would one individual’s journey to being ready to run this marathon make me any different to all the other good inspirational training blogs out there?

It is said that everyone has a story so perhaps being a good inspirational training blog is a goal to strive for.  Eleanor’s Endeavour is the idea of the story.  Having something other to tell my readers than just how my workout went and reviewing races (race reviews in the pages fixed above) that I do along the way.

I think in a way then his isn’t necessarily about that main goal.  I think that it’s about the how.  The accumulation of experience that equates to that overall eventual victory that I’m still hoping for one day.  Next month it’ll be two years on from the day that the video of Kilian Jornet running up Mount Olympus inspired me to run.  I’ve achieved so much already.  I want this to be an appreciation of the adventure of running.  The joy it gives you.  As Kilian coined it, ‘the search for happiness’ through running.

With this in mind I pledge to endeavour to adventure as much as possible.  Finding the adventure in the run even on training days that might seem ordinary.  Actually having a think about things.  Trying to effectively utilise the calm happy setting that my mind goes into when I run.  Patrick Rothfuss’ character Kvothe calls it the Spinning Leaf when he is practicing an art called Ketan which seems to be a mix of yoga and martial arts.  His description stuck with me even after reading.  That mind set we all go into when we run, that hidden place, filled with almost childlike calm and happy thoughts.

That’s the forecast at least.  A vague one.  The future will tell where my feet will fall next.  At least I’ve gotten out the front door.