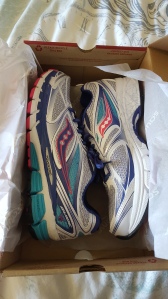 t to start it with a new pair of Saucony Ladies Guide 8 shoes from Up and Running in Bristol on North View.  The shoes are shiny and pretty.  Note; they are also not ridiculously pink or anything like that.  I was advised by the assistant that the soles on my old Mizuno’s had run down to nothing after a year and a half of wear.  They lasted a over 700 miles in their defense.  Pretty sure I’d be a bit worn down after that too.

This Bank Holiday weekend I wore them in down at Tytherington in a cottage called St James Court.  There were lots of horses and lots of open field.  After a stressful few weeks I found braving the outdoors tough due to my usually mild agoraphobia playing silly buggers with my anxieties about the great outdoors.  As those of you who read my Scafel Pike blog know that this emerged it’s ugly head at the summit of the UK’s highest mountain (awkward) and has plagued me every since.  Agoraphobia boils down to fear of open spaces, leaving comfortable spaces, and travelling with a fear of death from those things.

How does a runner tackle being agoraphobic? Usually at home I stick to the same routes that I know like the back of my hand. This gets dull pretty quickly though I’ll be honest. However, it’s guaranteed to get the miles in and a heck of a lot better than the treadmill. So when you have mild agoraphobia (made worse by stress which I’ve had a lot of lately) going out for a run in the country can be a real challenge. Firstly, getting out the door knowing you don’t know the area but that’s the adventure life of being a runner. Running in the West Country countryside this weekend reminded me why I started running in the first place. For the sense of adventure. It reminded me of travelers tackling on foot long windy roads in fantasy books when by foot is the only form of transportation. 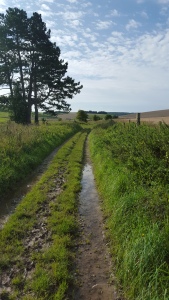 On Saturday instead of Parkrun I bravely put hand to doorknob and left for the roads to wear in the new shoes. I meant to stick to the roads, following the signs for Corton but found a National Cycle Path that looked all trails and had some fun. Every now and again looking out to the undiluting farmland to face it. Running 5k through long grass, heather, and thistles chasing bees and butterflies. As I said, it reminded me of what I gun for. I felt exhilarated after facing my fears instead of letting them get to me and staying in bed for the rest of the weekend. 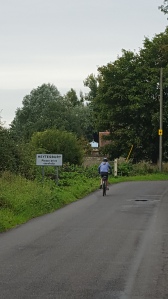 I really have an obsession with running from one place to another and on Sunday morning I followed the signs for Heytesbury for my 5k. Not much there apart from a lovely river, a church and a friendly cyclist that said ‘good morning,’ on her way through. I thought of the meme I saw recently on Facebook that states, ‘You know you’re a runner when you look at the miles on a sign and say I can run that.’

Hope everyone had a lovely weekend whatever their adventure was!