Last weekend as a bunch of runner friends were running Half Marathons I felt a bit left out and ran a 10k along the cycle track.  I did 10 minute 15 second even paced miles.  It felt good except a little pain half way through but it was manageable.  I fueled with Fruit Pastilles.  My current favorite on the run sweet.  It felt like a feat for me.  It was one of the longest runs I had done in a while and with the Alexander The Great Marathon coming up I need to start clocking more long runs were I can.  It really felt like spring had finally sprung with pure undiluted sunshine lighting the track and crocus blossoms on the banks.  There is something energetic about feeling the sun during a run again after a long winter of cold training and night training.  Beautiful.

On Tuesday I did a run with local group Up and Running.  That afternoon I had a bowl of pasta with Mediterranean vegetables for lunch to fuel up.  We did five miles from the shop down to the Suspension Bridge and back up again.  It was great to meet some local runners as I only live a few streets away from North View.  I made a few friends.  It was a very friendly evening.  I was pleasantly surprised by the nu

mber of pace groups.  I found a group suitable to my pace and kept up with them.  I could have conversations.  I feel that is important to feel like part of the pack.  Usually as I’m not the fastest on other running groups I am the slowest.  This was quite refreshing.  I did roughly 10 minute 26 mile pacing.  I was not on full form and feeling only about 50% efficiency so I did use one Gel on the run.  When I got home I had a mushroom and black barley soup, a nice hot bath, and a foam rolling session.  I don’t know why I just can’t deal with ice baths no matter how much I try!

“I am not fast,” I said to a companion whilst on the run, “I run marathons, I prefer to keep an even pace and know I can finish.”

Yet, I looked at those in the faster pace group with envy.

With that in mind I also decided to start speed work now I’m feeling the pain a lot less.  Well, managing it with codeine which I suppose is the same thing.  I only feel it every now and again and very rarely when I run.  So I hit the Sri Chimno 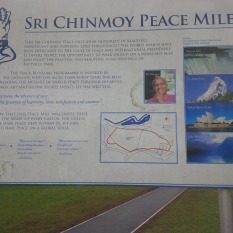 y Peace Mile at Eastville Park for three miles of speed work.  It was drizzly but I managed a 5k.  I was feeling better and did a negative split run with an average 9 minute 34 second mile pace.  I highly recommend that mile for speed work.  It’s not entirely flat as it is on a slight slope and it is used for the Sri Chimnoy group 5k race series over the summer.  I was surprised to see the mile now sign posted as it wasn’t before and I had to look up the route online.  I’ve made the executive decision to stop using marathon running as an excuse to plod along!