On Sunday the 8th of November, after a very early marathon breakfast at Athens Gate Hotel, I found myself in the starting pens at Marathon.  I got chatting with a former Bristol & West AC member who was running his first Athens Marathon and a couple of women from California who were travelling for a few weeks to see their favourite sites.  ‘I’ve never run any marathon,’ one of them said, ‘so we thought if we would train for any it would be Athens.’ There seems to be the general agreement amongst runners that the Athens Marathon is indeed the Authentic.  The lifetime experience to tick off the Bucket List and say, ‘I did that!’

For me it was Athens Marathon Take Two.  After the heat stroke I suffered last time I wanted another chance at getting a better time.  This time round however I had IBS (Irritable Bowel Syndrome) to battle with so the half or so of time I expected to make up from the heatstroke I ended up spending in toilet queues instead.

I must have had a leftover strain from Bristol + Bath Marathon in my right foot.  Two miles in the right inside of my foot started to ache.   It spread the seeds of doubt through me.  Can I do this?  Buses stopped on the opposite side of the road to take anyone from the medical areas to Athens every fifteen minutes.  As I was glancing over at the bus that was coming up to park ahead I saw a man in crutches running with his foot suspended between them.  I saw him powering on and thought if he can do it on crutches I can do it with only a bit of discomfort.  Determination is key.  In my opinion running a marathon is 80% mental.  20% actual running. 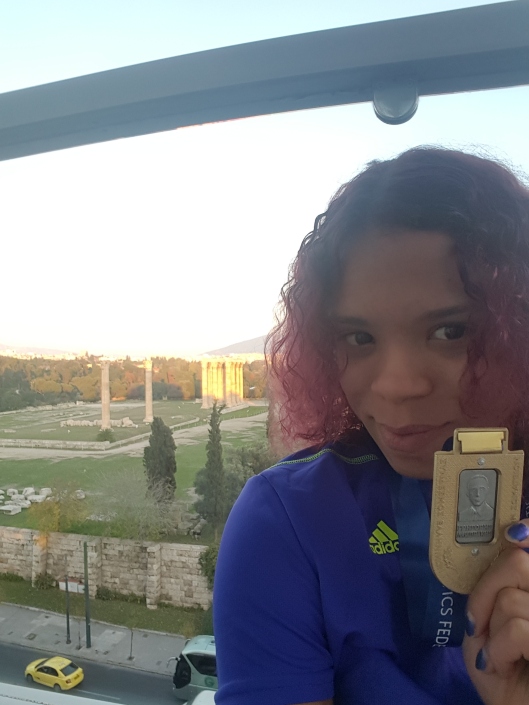 I finished in 5:57:59 shaving a couple of minutes off of last time.  Not quite the big PB gain I was hoping for but still an achievement nonetheless.  I’d forgotten quite how challenging the course is.  In my head I thought it was just one big hill towards the last 10k going into Athens.  I was corrected on route with the course rising and falling in nearly regular slopes.  It is not a flat course.  On Strava the total elevation amount was 1, 201 ft which is huge for a road race.

Throughout the run I was surprised how little had changed about the marathon and my experience as a regular holiday goer in Greece regarding the current economic crisis.  The Greeks are still a thriving and giving community.  Their shouts of, ‘bravo!’and giving of olive branches lacing the 26.2 bare route of hills and road with kindness and support.  We all hear cries of, ‘the volunteers were great!’ In races but here the medical volunteers deserve a special shout out for spraying and rubbing freeze pain solutions into my foot and ITB band after that old injury started to raise its ugly head towards the end.  All in all I feel I fought the battle of my own desire to be like, ‘Nah, that’s it I’m out’ rather well.

After I managed a sprint finish (believe it or not) at the Stadium I hobbled home to the Hotel with the help of Mum who’d come all the way to Athens with me.  My foot was twice the size as normal and I could barely put weight on it.  Ouch!  We had a victory dinner of steak, popcorn potatoes and Greek yoghurt, cucumber and mint mousse.  A lot of wine of course!

Things That I Learned At Athens Authentic Marathon 2015;